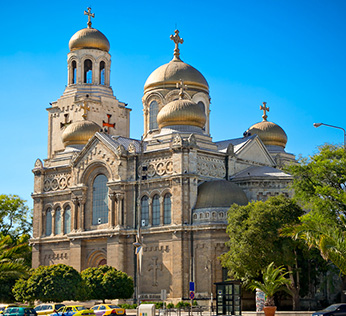 Varna is Bulgaria’s third largest city and has deserved its name as the sea and summer capital of the country.

It was inhabited even before the Greeks established their colony of Odessos here about 580 BC. Later on the Romans and the Byzantines, the rulers of the Bulgarian kingdoms and the Turkish sultans succeeding each other left traces in the history of the city until the country got its independence. Ancient, medieval, renaissance and modern cultures mingle and easily coexist here.

The gem of the Bulgarian Black Sea is nestled on Varna’s expansive bay offering seven kilometers of inviting sandy beaches and amazingly calm sea. Apart from being a beach resort with a mild and sunny climate, Varna prides itself on a wide choice of cultural attractions and historic buildings, museums and art galleries.

Deneesti Ltd offers a wide range of shore excursions in Varna and its beachside hinterland. Recount the history of this long popular Black Sea resort or relax and admire a display of Bulgarian folk dance.