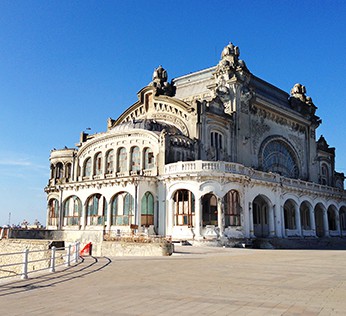 Constanța, historically known as Tomis, is the oldest continually-populated city in Romania.

Visited by Jason and the Argonauts after finding the Golden Fleece, the city remains popular among tourists.  Its most popular regional attractions are traditional villages, ancient monuments and vineyards, not to mention the best preserved river delta in Europe – the Danube.

DenEesti also organizes full day tours to Bucharest – the capital city of Romania. The grand Palace of Parliament – the largest Parliament building in the world, the Triumphal arch and the Revolution Square are just a few of the highlights that we offer in this beautiful capital city.

Population
425000
Fun fact
Romania gave birth to some extraordinary scientists and engineers. Here are just a few of them: Paulescu – the discoverer of insulin; Pavel – the inventor of Hyper CD-ROM; Poenaru – inventor of fountain pen.